She performed title role of Turandot with the Lancaster Music Festival with a live National Public Radio broadcast, and with Cincinnati Opera in the role of Kitty Hart in Dead Man Walking. She triumphed in performances of Suor Angelica and Tosca to considerable acclaim with California’s Festival Opera.

Ms. Anderson has performed the title roles in the baroque Alcina and Agrippina, the classical Donna Elvira in Don Giovanni and Pamina in Die Zauberflote and the bel canto in Donizetti’s Maria Padilla. The favorites of the Romantic literature include Mimi in La Boheme, Amelia in Un Ballo in Maschera, Alice Ford in Falstaff, Marguerite in Faust, Nedda in I Palgiacci, Violetta in La Traviata, and Liu in Turandot, with opera companies including Arizona, Eugene, Marin, Sacramento, SanFrancisco Pocket Opera, Spokane, Utah, and West Bay Opera.

On the concert front she has performed Mendelssohn’s Elijah in Israel with the Jerusalem Symphony, Beethoven’s Ninth Symphony, Mahler 4th Symphony, Strauss’ Four Last Songs, and many other works with professional orchestra throughout the United States and abroad. Ms. Anderson has also been a guest soloist with the Mormon Tabernacle Choir on a live televised broadcast. Other works include the Dona Nobis Pacem by Vaughn Williams with the Sacramento Choral Society and the Verdi Requiem with the San Francisco Community Chorus and the San Francisco Choral Society at Davies Symphony Hall. Most recently Ms. Anderson performed for the National Harp Convention, soloist for the San Francisco Community chorus and Soloist recital for the East Bay Opera League in Oakland, CA.

She enjoys living and teaching voice in West Jordan, UT 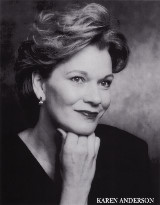 As Turandot:
As Alcina:
Bachianas Brasileiras:
Four Last Songs by Strauss:
As Suor Angelica:
As Tosca:
As Liu:
As Pamina:
As Mimi:
As Nedda:
As Marguerite:
As Turandot:

Soprano Karen Anderson…..Her voice is neither harsh nor coarse, nor is her physique monumental, thus making for a lovely ice queen in sight and sound.
Barbara Zuck, Columbus Dispatch

Anderson’s voice was an ideal choice for the material. She gave each song a performance as natural, unforced and deeply meditative as it was technically brilliant. Anderson shaped the long, complex phrases into glorious musical statements.
Georgia Rowe, Contra Costa Times

The Tosca role was splendidly sung by Karen Anderson, a soprano whose voice projected like a beam of light. As an actress, Anderson came into her own in the great second act…when Anderson poured out Tosca’s grief in the eloquent "Vissi d’arte," the effect was stunning.
Marilyn Tucker, Contra Costa Times

Karen Anderson as Pamina sang with the cleanness- with no vocal affectation- that is the essence of a strong Mozart interpretation. Without being sentimental she brought a tender despair to her aria lamenting Tamino’s indifference.
Anne Matthews, Salt Lake Tribune

At the upper limits was Karen Anderson, a good actress whose substantial soprano had the right proportions, quality and expressiveness for a steadfast, feminine Pamina.
Dorothy Stowe, Opera News

For better or worse, La Boheme depends on its Mimi. Karen Anderson delivered a Mimi who could carry the opera without any other help. She moved well, she showed a true feeling for the part, and throughout the evening she maintained a pure, youthful, silvery quality of voice which heightened the heartbreak of the role.
Linda Wilton Smith, The Register-Guard

Karen Anderson –shows a fine control over her instrument, keeping it fresh and innocent in her early appearances, releasing intensity and power in the closing scenes.
Michael Ackley, Sacramento Bee